Everything You Need To Know About How To Hack Android Phone

If you want to learn more about how to hack android phones, read this article and let us know your thoughts in the comments.

Witnessing the technological advancement during the present times can be quite easily made out through the innovation in smartphones. One can use a smartphone to not just send messages but also make payments and downloads. However, hackers are no way behind in this case. They too have found new avenues to accumulate mobile phone users’ data to meet their malicious requirements. Their click attacks as well as malformed apk files are directed towards attracting victims to gain control of their mobile phones.

A mobile device makes it possible for different users to communicate through radio frequencies. You can use the mobile phone for multimedia sharing, sending emails, and even for internet access. Mobile phones have surely taken the place of computers or desktops in the present times. From making it possible to navigate via GPS to storing critical data like passwords, the reliability on mobile phones has increased tenfold nowadays.

What is mobile phone or smartphone hacking?

Mobile phone or smartphone hacking refers to the situation wherein an individual manipulates or gains access to a person’s smartphone without them knowing. It is an unauthorized act of accessing a smartphone for maliciously gaining access to it. 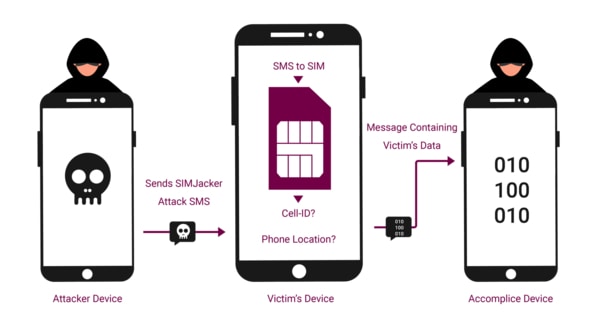 What are some common types of attacks used by hackers to hack a smartphone?

There are four common types of malicious attacks used by hackers to hack a smartphone. These are as follows:

All these types of malicious hacking attacks aid hackers to hack a huge value of sensitive and personal information of another user. From providing partial access to one at the root level, attackers can use these resources to hack all the users’ information.

Which is one of the most insidious hacking attacks on mobile phones?

One of the most insidious hacking attacks on a mobile phone is done through SMS Forwarding. Through SMS Forwarding, the hackers usually send trojans. These trojans are meant to steal verification as well as authentication codes present in the text messages. These verification text messages are basically from any online payment service provider. Once the hackers have intercepted the verification and authentication codes, the codes can easily be used to penetrate into customer accounts.

Another method used to hack any android phone or smartphone is through lottery messages. Hackers use modems to send thousands of such text messages every hour. These text messages usually revolve around content such as product advertisements and website links. These messages have hidden ID stealing Trojans. Finding such hackers is hard because they hide as well as their location.

How to hack android phone?

Are you wondering about how to hack android phone? Then, we are happy to inform you that hacking and spying on android phones is not very difficult. Almost every Android phone is built with open-source programming interfaces (APIs). These APIs make it very easy to hack an android phone. However, to monitor an android phone user, the hacker would need access to their android smartphone.

If gaining access to someone’s android phone was easy then you surely would not have been required to hack their phone in the first place. Also, several unsuccessful attempts might make the android phone user suspicious.

Once you get access to the android smartphone, simply download and install a safe and secure spyware app. This spyware will give unrestricted access to another user’s smartphone. From calls to GPS to even personal documents, there is a lot you can spy on through the app.