Hungry Dragon Game Is a Rapid Fire Game of Fury

Hungry Dragon has just been launched last month. If you are one of those mobile game aficionados, you sure will like this awesome game. This game is just one of those rapid-fire game which keeps you at the edge of your seat.

You can play this game on your Android phone and also on iOS. It is great fun. This game has you in control of a few spiteful dragons, whom you control. The dragons burn and spurn anything and everything on their way.

Here, you are the Dragon controller and not the good townsfolk out there.  You earn points and change costume. With each new costume, comes great power. You earn points and other weapons to leash vengeance on the common people.  Isn’t it different from the boring games that you have all played till date? 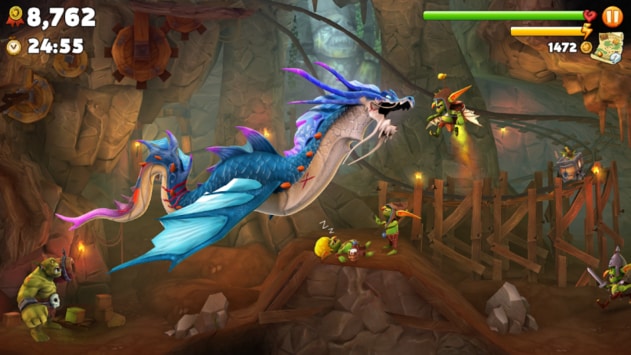 With each step, comes new costumes, eggs as awards, and pets with powers, chests and what not? Hungry dragons exist in a large world with various areas to explore. Once, you cross a level, you get to move on to the next and get news ammunitions on the way.

You get 2X scores, when you eat preys in a jiffy. The more you devour, the more multipliers you get. You will get to take part in three missions. You can choose to play various missions or skip them. It is totally on you. There are live games as well, like quests, tournaments and passive events. You can also play it with our Hungry Dragon MOD for Android & IOS and make the game easier.

Hungry Dragon is a game you can play without an internet connection. However, you will not be able to access certain features like picture sharing, quests, tournaments, and cloud save. Transfer data between two phones having the same Facebook ID login and have fun with your friends.

The cloud save feature is just awesome. However, you will need the internet for that. All your problems can be solved online. Almost, all Apple devices are compatible. They are iOS9.1 and above like the iPad Air and iPad Mini. Android 4.2, Nexus 5X, Galaxy J3, Galaxy Note 5, GALAXY Note3, Redmi Note, Xperia support the game.

Ubisoft is the company behind this fire-spitting dragon game. It comes with a capacity of 445 MB. The character called Nibbler will just blow your mind. He wants to eat everything that comes in its path. You are in control of this game. Help, Nibbler eat all that comes in its way.

Hungry Dragon Game has the ability to keep you interested throughout. It can be easily controlled via the touchscreen of most phones. It is extremely simple to play. Just make it feed on small creatures and let them grow. The more the dragon feeds, the more powerful it becomes.

You play on 3D graphics platform, with picture quality that can give most games, some serious competition. In all, it is an action-packed game, that will give you a fabulous experience that few can match.

You can download Hungry Dragon for free on Android or IOS devices.